I was introduced to Cisco servers with their C200 M1 box pretty shortly after it came out… Speaking of which March 16, 2009 is the day Cisco announced the UCS platform. So I’m sure it was sometime late 2009 that we got a couple boxes. Anyhow, I wasn’t really impressed as the box felt more like a white box than an enterprise server. So looking back I can see how UCS has made HUGE strides, and now that I have many UCS blade installs under my belt I am a believer in what they are doing with blades. Their rack-mounts… well they certainly have a place, but aren’t always the sexiest girl at the party.

Anyhow, if you follow any of the tech news outlets you will probably already know that Cisco has claimed the top spot on the North American blade server sales (based on revenue).

I found the following pretty graph on the Cisco site in which they uses IDC data to present the numbers from third quarter 2009 (when they started selling UCS) to the new first quarter 2014 results. Effectively they have went from no market share to 40% in 5 years… impressive. 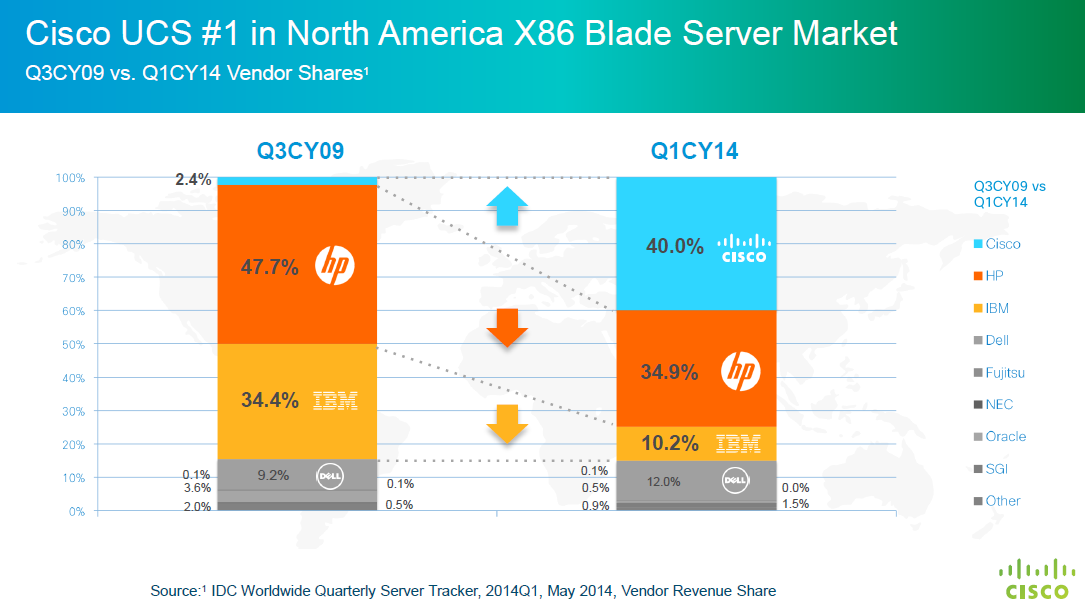 For me I have some mixed feelings on the results. Don’t get me wrong I am a HUGE fan of UCS, I believe in the concept and trust the platform 100%. Plus if I had to buy servers for myself/company I would pick UCS hands down. HOWEVER, I have a hard time with these numbers because they are based on revenue. I would be much more comfortable if the numbers were based on actual number of servers shipped. Why?

The answer (IMO) is pretty simple… Cisco list price is CRAZY compared to what the servers actually get sold for. While I cannot speak for IBM or Dell or any of the other vendors, I do know that HP generally isn’t giving nearly as much of a discount off list price as Cisco does.

In closing, I just want to say congrats to Cisco! Even if they weren’t able to claim the number 1 spot I would still thank them tremendously for an amazing product. It’s certainly not too often that a new product becomes such a game changer in such short time.