Wednesday, 8 February 2023
You are here: Home 2015 February State of the VMware SDDC

As part of my trip to VMware‘s 2015 Partner Exchange I was asked to dive into the Software Defined Datacenter. So I thought I’d do a post as to where we are currently at with SDDC as a whole and what make up the VMware SDDC. Then explore some of what the 3rd party ecosystem adds to SDDC.

The idea behind using software to replace hardware is pretty simple when you look at it from a high level. Our goals:  save money and respond to business needs as fast as possible. All other benefits are just gravy.

What makes up an SDDC?

VMware has defined SDDC to include compute, storage, networking / security, and management / automation. But don’t let the new buzz word scare you. VMware (and other vendors) have had the products (or at least many of them) that make up their SDDC portfolio for a long time. What is new is the branding and the integration between products. Below I’ll explain what has been around and what is new.

If all goes well and the benefits of SDDC are realized, then another VMware marketing graphic should be spot on: 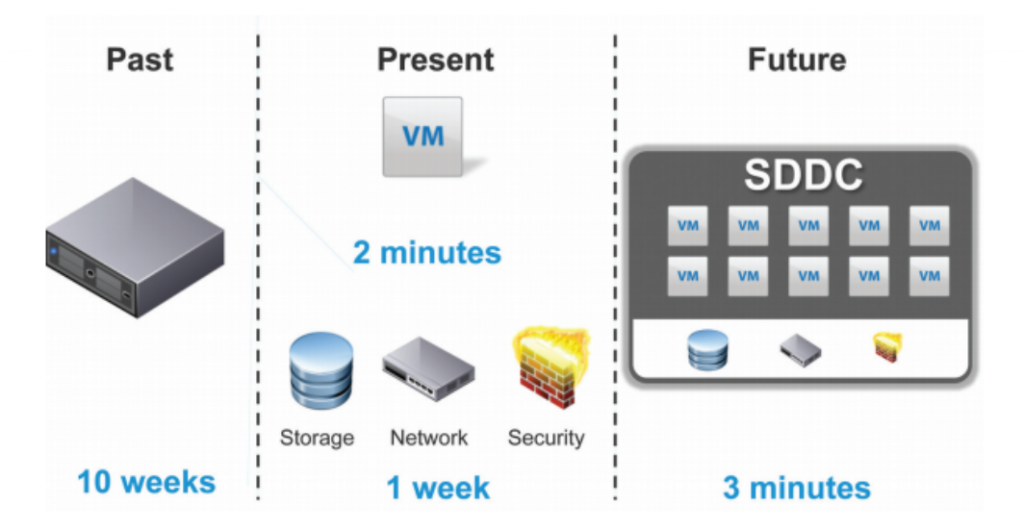 Notice what VMware is targeting between present and future… basically they are calling out the other IT silo’s … saying “ok our stuff is in order, but you still make us look slow, time to change that”.

So what is going to get us from present to future ? 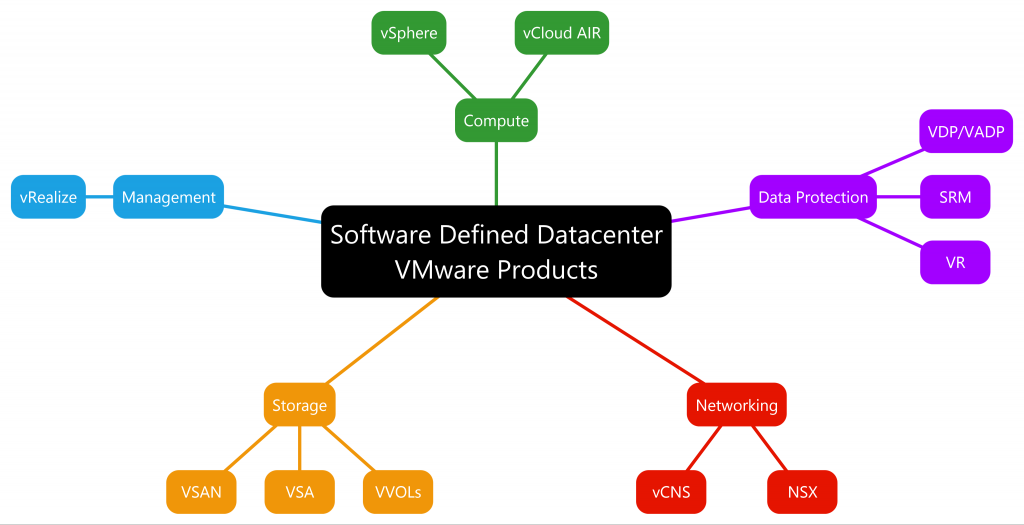 Existing: VMware vSphere – Vsphere is still the foundation of the datacenter, they continue to innovate and improve vSphere with their latest release, 6.0.

New: The new part of the compute offering is vCloud Air. While vCloud services have been available from VMware service provider partners for a long time, now VMware is officially in the IaaS business. So if you don’t want to own your own gear, you can use VMware as your hardware provider. In fact it’s now as easy as dumping in your credit card info and logging in.

Existing: VMware has had the VSA for a while, however it is going end of life, they also released VSAN in vSphere 5.5 and gained some traction with it. VMware has also had some integration on the “old school” storage side with their VAAI and VASA plugin’s but nothing that is really considered Software Defined, except for VSA and VSAN.

New: Lots of stuff to talk about here, and possibly the most exciting part of vSphere 6. The latest version of VSAN, released with vSphere 6, is supposed to be HOT and should get even more traction with customers. But if you already have an investment in a SAN don’t fear, VVOLs are finally here. The purpose of VVOLs is to extract information from your array so that you can take full advantage of those features in vSphere. We should see all of the major SAN vendors supporting VVOLs in 2015 (my 2 cents).

Existing: VMware’s software networking technology was vCloud Networking and Security and while it is still available, the buzz is around NSX. NSX was added with the acquisition of Nicira in 2012, but has been pretty hard to get a hold of without a P.O. but with vSphere 6 it looks like it will become more mainstream.

New: While NSX technically isn’t new, the level of integration and polishing that comes with the latest versions is amazing. It’s pretty simple to install and is crazy powerful in terms of virtualizing the network. Simply put, with NSX you could pretty much get away with using the cheapest L2 switch that supports jumbo frames, obviously 10gig is the best option, but it will even work with 1 gig. And when I say get away with… i mean literally that is it, as NSX can be your router and firewall and pretty much everything else needed in the networking world. (Obviously there are some exceptions, but NSX does a damn good job)

Existing: vCOPS was rebranded at VMworld 2014 and is now vRealize Suite, it has gotten some updates but at its core it is still the same product. The other major existing product to be rebranded was vCloud Automation Center, which is now vRealize Automation.

New: Most of the products in the management and automation space are not new, but all did recieve updates coming into the 6.0 family.

I don’t really thing VMware puts data protection into it’s on category, but since this is my blog I’m going to. Mainly because data protection is one of the most popular areas of the datacenter, and it is becoming more and more software defined.

Existing: VMware has VMware Data Protection, and VMware Advanced Data Protection. These are both existing solutions that have been around for a little while, but there are new features in 6.0. Also VMware has Virtual Replication and also SRM to round out their data protection portfolio.

New: New to VDP 6.0 are agents for the three major Microsoft applications as well as the ability to utilize an external Data Domain with DDBoost. For full details check out the release post from VMware here.

Overall VMware has a pretty darn complete SDDC portfolio, however there are many offerings from VMware partners that enhance the VMware portfolio and either extend management and automation, or just make things easier/better than the VMware versions. 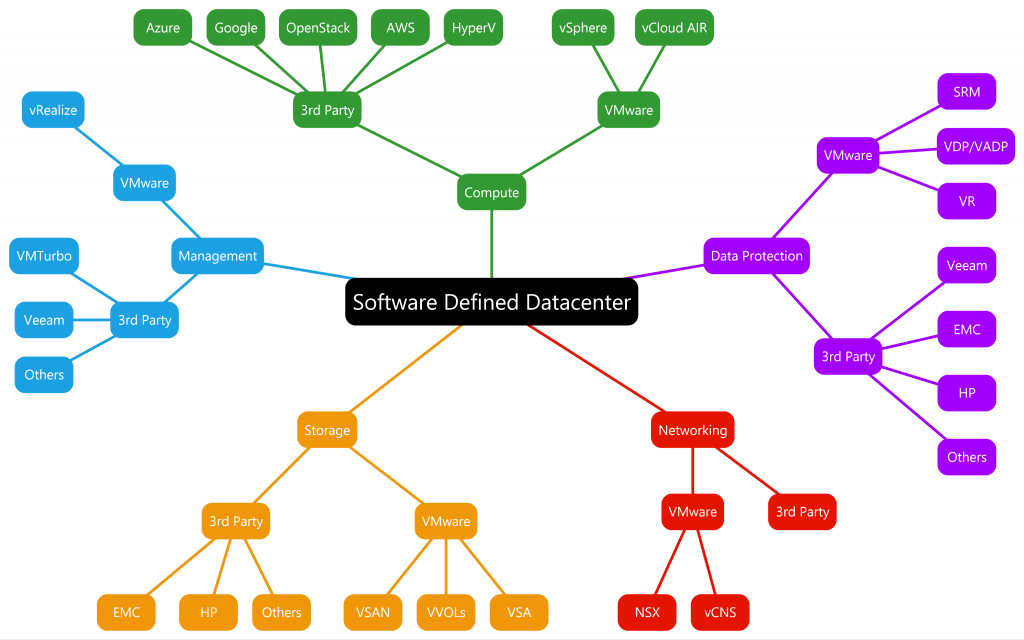 You might not think there is much to talk about on the compute side from 3rd parties, but in reality there is actually a lot of of options in this space. VMware has a multi-hypervisor manager as well as the ability with vRealize Automation (formerly vCAC) to manage Amazon and Openstack deployments (which means you can pretty much manage workloads on anything that Openstack supports). So basically the 3rd party add here is that you can utilize Iaas or compute services from many different sources now… your workload isn’t required to run on vSphere.

3rd party Software Defined Storage has been around for a damn long time, it just wasnt called software defined. Lefthand Networks, acquired by HP, has been creating enterprise class storage out of standard servers for a long time. And they aren’t the only ones with a Virtual SAN Appliance (VSA). There are also many storage startup’s out there right now that claim to be SDS, and it will be interesting to see how things shake out in the next couple years in this space.

On the networking side most of the 3rd party value add is around network services, like firewalls or packet inspection. I had a great conversation while sitting at breakfast with one of the Palo Alto Networks employees. F5 and other appliance makers also have virtual appliances these days as well.

This is probably the easiest section to find 3rd party products in. Back in the day (lol) VMware didn’t do a great job of monitoring and automating actions based on that monitoring, and in some regard they still aren’t awesome at it. If they were the best and simplest, products from VMturbo and Veeam wouldn’t have the following that they do. And while they are the two names I run into the most, there are countless other solutions out there depending on what you want to do.

This is most likely the biggest space for partner software offerings; mainly because this space could be subdivided into two spaces: backup and replication. While Veeam was one of the first VMware optimized backup and replication solutions, there are so many solutions that now integrate with vSphere that I probably haven’t even heard of them all. In combination with the backup software is the storage of backup data, which IMO is what makes this portion software defined. Today there is really no need for a backup appliance that does dedupe and compression; instead you can download one of many virtual appliances and back end them with whatever storage you want. There are solutions from HP, Quantum, and Windows Server 2012 even has dedupe built in.

On the replication or DR side of the space you are seeing the offering grow from what was an array based replication only world to a world where there the majority of products are software defined. The biggest of which is Zerto for near realtime replication, however EMC did get into the software defined replication market last year when they released a vSphere based version of Recoverpoint. Veeam also has replication build in to their product but it is more of a snapshot copy function than a near CDP solution as it still relies on VMware snapshot technology instead of write splitting.

Note: I updated this article to include information on replication and DR products… as I completely left them out in the first revision… guess that’s what I get for trying to write an article late at night while watching TV LOL.

Overall the datacenter space is transforming at an amazing pace. What were best practices are now outdated, and problems that had no good answer before are now easily solved. And while I don’t encourage anyone to go outside of their comfort zone, I do encourage everyone to explore new solutions to problems they have as you might just find a better solution then what was available before.