Disclaimer: This is a pretty long article and explains the general overview of the network. I have not gotten into the technical setup of the radios in this article. I will save that for a future article.

My family owns a few farms and other property in west-central Ohio. A place that is just starting to see reliable consumer broadband in rural areas. Growing up I was stuck with 56k dial-up for most of my childhood. It wasn’t until high school that I was able to get broadband quality internet, and even then it was 512kbps down 128kbps up. The next problem with it was that it was delivered via microwave signals that originated approximately 25 miles away. It was very unreliable during the weather that kept me inside.

Fast forward to today… I know much more about technology then I would have dreamed I would know when I was in high school. Which has enabled me to provide certain luxuries for my family (parents, grandparents, cousins, etc) that I wasn’t able to take advantage of. One of those luxuries is high-speed, low latency internet access. While working for my current employer one of my co-workers mentioned the Ubiquiti radios, so I looked into their features and started to plan out what could be accomplished with them and the tall silo…the main problem that plagued my idea however, was that DSL was still not available at any of our properties yet.

Just down the road one of my friends Mike had just built a new house but broadband was not available. During one of the many weekend beer drinking get togethers, I mentioned that since his parents house was less than 1/2 mile away we could probably use the Nanostation 5 radio in order to link his house to his parents. His wife overheard and gave us the go ahead on whatever it would take to make it happen.

The NS5 radios are 802.11G radios capable of 54Mbps, much faster then the 5Mbps down connection at Mikes Parents. The pictures will show that there is a very clear line of site, my only concern was that during the late summer tall corn fields would really mess up the fresnel zone. After alignment we were getting around -60 dbm and could pass approximately 15-20Mbps. We implemented this as a simple layer 2 bridge from his parents network to his router…not the best design as his house is behind a double NAT, but non the less it works for the simple browsing that they use it for. 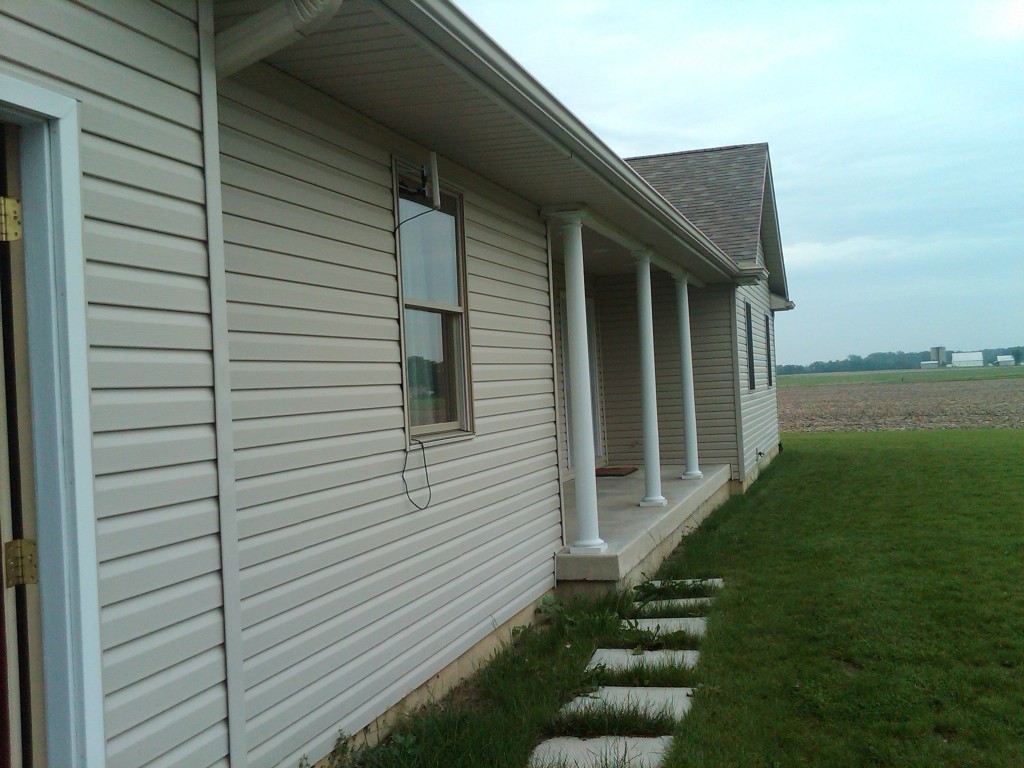 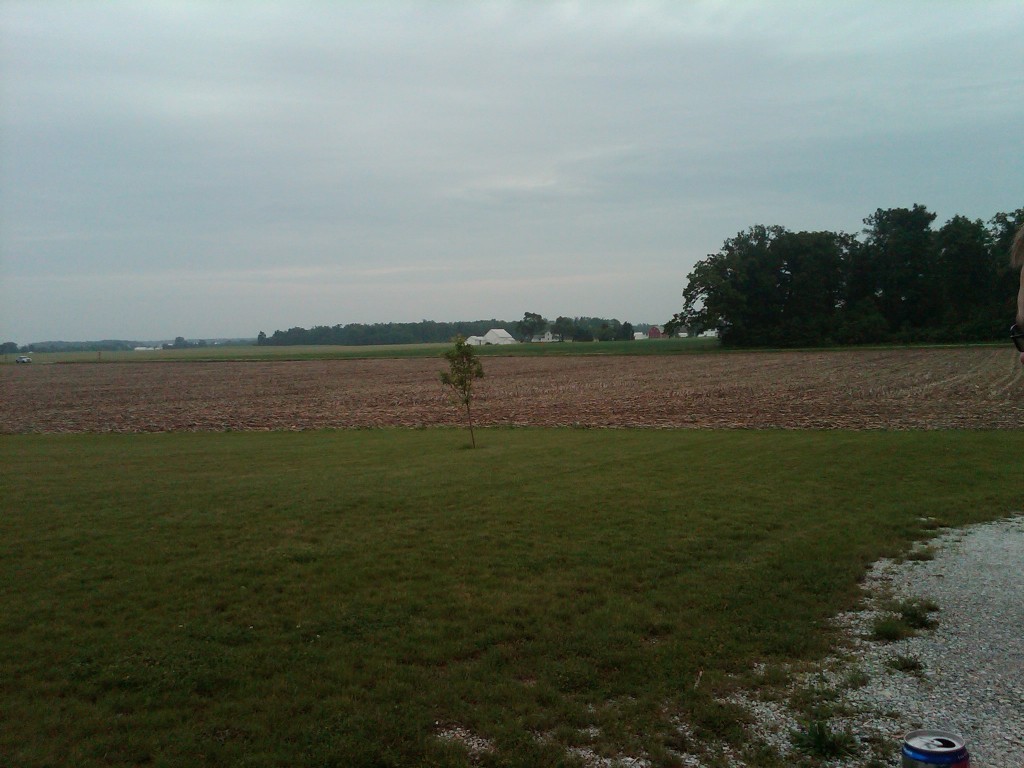 Finally, last fall Verizon DSL became available at my uncle’s house, soon I had convinced everyone that with a little investment in new devices we would save them monthly fees and pay for those devices within a few months. The design was to be a little different this time however, as there are three houses that would need to be connected together. Site 1, my uncles house, would be the gateway to the internet. It also houses all network equipment for monitoring and maintaining the network remotely (as I live 45 minutes away). 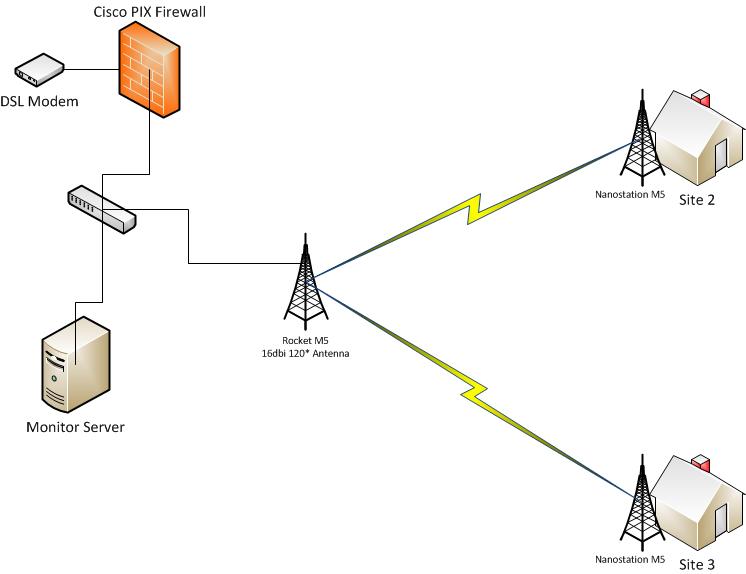 This implementation was setup much differently for many reasons, mostly for scalability and isolation. After the neighbors caught wind that we would be covering a 120 degree area to the northeast I had people asking me if it was going to be possible to get internet access from me… they figured they might as well because I already come fix their PC when it breaks.

The radios used in this design are MIMO and are capable of much higher speeds than the ones used at Mike’s house. They can also be setup so that each device at a “customer” location is isolated from the other customers. Between these technologies the traffic from one remote site though the network is secure enough for the users on it.

So far the only users on my little wireless experiment are those who are related to me, they are acting as a Proof of Concept and as guinea pigs to make sure the technology is reliable and sounds before I offer it to anyone else. And I must say that so far its working great, but because of the longer distances (approximately 1/2 – 3/4 of a mile) between sites, and only partially clear line of site I have seen some major shifts in signal strength during the transition from winter to summer.

Although I still consider myself a greenhorn in the wireless networking field, I would say that I have learned some important lessons along the way on these projects.

Right now the wireless infrastructure is used only for internet sharing, but in the future I have plans to install a DVD server at the head site and implement some sort of IPTV. Most likely something like the Patriot Box Office, or Netgear Entertainer Live. So that we can also share movies and music between homes. The other idea that has crossed my mind is to use Trixbox CE and implement a VoIP setup at all of the homes so that everyone has the ability to call each other and has cheap long distance calling. (Voip.ms is about 1.5cents/minute)

At first the costs for putting something like this in seems pretty expensive for the normal non-commercial use. The wireless equipment for this project was slightly under $400, but this doesn’t account for all of the other equipment that was already in place like TV towers, switches, etc. However, once you get in to what it would cost to have an internet connection at each house (approximately $39-$69/ month depending on package) its easy to see how quickly this pays for itself. Currently we get 3Mbps down and 768Kbps up from Verizon for $29.99. This is half the cost and double the speed of the competitors offering. Even if the radios need replaced every 36 months this is still a great ROI.