One of the interesting travel accessories that I have acquired is a FuelRod. If you don’t know what a FuelRod is let me explain. Basically, it is a USB battery pack much like the free ones we get at trade shows, the only interesting difference is a barcode on the one end. Why Interesting? The appeal of a FuelRod over a free trade show battery is that you can swap a empty one for a fully charged one at any of the FuelRod kiosks.

While some people (http://www.disneytouristblog.com/dont-recommend-fuelrods/) don’t see the value of FuelRod, I (partially) do because I travel quite a bit and am always in airports where outlets are still at a premium. And while I have a Mophie 5x, I prefer to carry a smaller battery in my pocket. The real reason I bought a FuelRod, however, is because of the assecory cable. I was traveling and forgot my iPhone cable. A new iPhone cable at the airport was over $24, but a new FuelRod was only $20. Plus it cable with the cables I needed. So I paid for an iPhone cable and got the battery for free, in my opinion.

So anyway, long story short, last weekend I was at Disneyland with my wife hanging out before a blogger event and managed to catch a glimpse inside of a FuelRod kiosk. I have to be honest I was disappointed by what I saw. I later tweeted about it and received a response from FuelRod, but it got me thinking… what else would I change if I were doing R&D for FuelRod. This post is the outcome and is meant to be light-hearted and show a little of my Imagineer side. (See what I did there… Disneyland…. Imagineer….)

I have to be honest I was disappointed by what I saw. I later tweeted about it and received a response from FuelRod, but it got me thinking… what else would I change if I were doing R&D for FuelRod. This post is the outcome and is meant to be light-hearted and show a little of my Imagineer side. (See what I did there… Disneyland…. Imagineer….)

I later tweeted about it and received a response from FuelRod, but it got me thinking… what else would I change if I were doing R&D for FuelRod. This post is those thoughts and is meant to be light-hearted and show a little of my Imagineer side. (See what I did there… Disneyland…. Imagineer….ha ha ha)

What I thought a FuelRod kiosk was

In my mind, beginning when I bought a FuelRod, I thought wow what a great business plan… basically put some cheap USB battery packs in a vending machine that can sell, dispense, charge, and then repeat the process. Unfortunately, I was wrong. While I was catching a glimpse of the guts of a kiosk I also say the guy refilling it with new batteries. I thought to myself, WOW, that totally adds overhead as people are typically the most expensive part of a company. 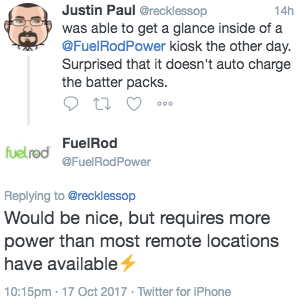 The problem I saw

I have never had to wait to swap a battery at a kiosk so that either means that they have plenty of spots to swap them, or no one uses them. I hope its the first reason. My point is, if the average kiosk does 1 or 2 swaps an hour it would only need to charge 1 or 2 batteries at a time, assuming the battery recharge time is 1-2 hour. The power draw to charge two batteries would be about .1 Amps @ 120v, or about 10 watts, basically nothing. Which doesn’t really explain the twitter response I got received from the FuelRod team…

I bring all that up because the reason I was able to get a glance inside of the kiosk, as I mentioned before, is that there was a person refilling it. It appeared as though he was taking charged FuelRods from his backup and adding them to the machine, as well as removing the empty ones. Talk about a pain in the ass (meaning manually servicing the kiosk)!

Anyhow enough complaining, let me go through what I think should be added to the product/offering!

So there are several things that I think would improve the FuelRod bottom line via automation and consumer interest.

There is no reason why an Arduino or a Raspberry Pi type device couldn’t be added to do a few things to automate the kiosks. In my opinion, the swap process should go like this:

This process could easily prevent kiosk servicing, greatly reducing costs! The only time that someone would need to stop by is for refilling the “new” FuelRod bundles, and removing the dead batteries. These needs for human intervention could be remotely monitored so that unneeded trips are prevented.

Each FuelRod seems to have a unique barcode on it. If the company were to track (and I assume they do otherwise there is a huge missed opportunity) FuelRod swaps they could essentially build a change of swap data for each customer. This would make it really easy to create a map/analytics dashboard for the geeky users like me.

It could show a map of all the locations where you have swapped a FuelRod, or even an animation of swaps over time to show how you have moved around the country or world. Google does this with people and their cell phones and its kind of cool to look back and see where you have been. (You have to enable this btw)

Have you ever been to Where’sGeorge? It’s a site where you can enter the serial number on a dollar bill and see if anyone else has checked in with it. FuelRod could allow users to see where their current FuelRod has been…maybe its been across the world? or maybe it has never left your state. Yes, it is just a geek cool factor… but people chase around Pokemon with their phones … so let’s face it people are all geeks these days.

Adding to the last couple of points FuelRod could leverage this tracking data to get its user base more active. Customers could earn badges for swapping fuel rods 5, 10, 20, 50, or 100 times. Or maybe they swap in 10 different locations, or in multiple countries. There are many awards, or badges, that could be created.

This might seem dumb, but I’ll say it again, everyone is a geek these days. Users could track and share their progress with friends via an app and see where they rank against other customers, maybe like Waze?

Overall I like having access to the FuelRod kiosks, and overall the service and availability is OK. But OK doesn’t help company growth, buzz among a user base is what does that, and I think my “Fun Factor” features would help do that. Anyhow, just my 2 cents for a Fun Friday blog post.