This week I have been attending HP’s Discover event in Las Vegas and one of the big announcements was the release of a virtual StoreOnce Appliance. If you are not familiar with StoreOnce it is similar to EMC Data Domain, or Exagrid deduplication appliances in that it is a backup storage target for your backup software. HP has a hardware line of appliances for everyone from the SMB to the Large enterprise, but they are the first to release a virtual appliance version. 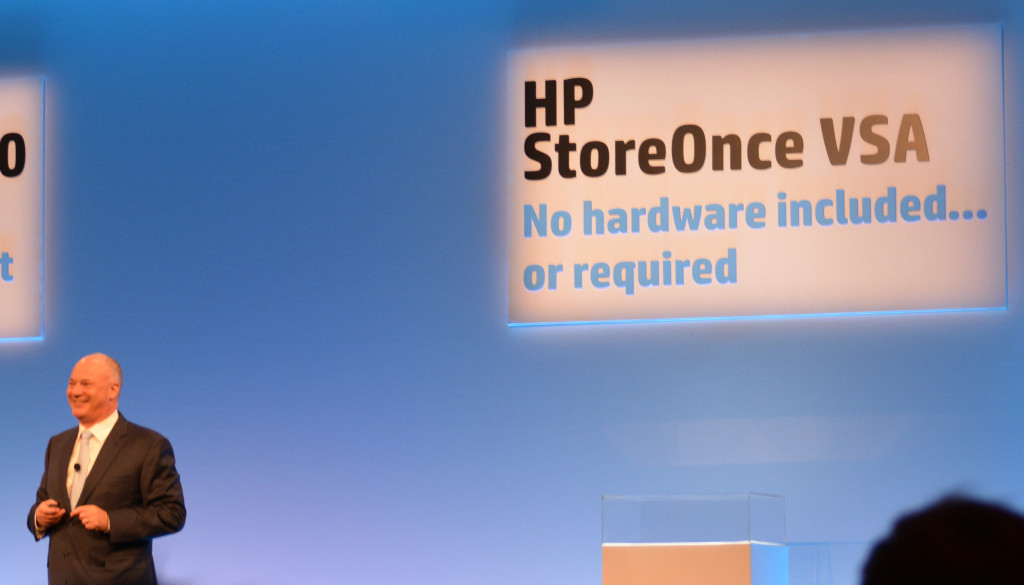 During my “Day Job” at DPSciences I work with EMC Data Domain very regularly and in a past life I got to work with Exagrid a bunch too, but I have not had the opportunity to play with HP StoreOnce, so the fact that they have a virtual edition that I can download in a couple of weeks and run on my home lab is pretty exciting!

Overall I think the idea of a virtual dedupe appliance is awesome too, in fact I think the teams at both EMC and HP will agree that I’ve been bugging them about doing it for a while, so I’m glad that someone finally stepped up and brought one to market. But I don’t think this will be just for lab use either, in fact I think that it will sell great because when customers first go down the diskless backup road one of the biggest obstacles is the cost of the dedupe appliances. And to make a full solution you really need two of them, one at your main site and one at your DR site. But what if you could take a slightly older storage server or array and repurpose it as a DR site dedupe appliance?

This would definitely bring down the cost of deploying the full solution right away. It will also work great for a small or remote office where you could do backups to the virtual appliance (running on the same VMware host as a couple of VM’s out at the remote office) and then replicate back to the mothership at headquarters.

Unfortunately I’m not cool enough to already have access to the bits, so I really have no technical details or pretty screenshots, but I’m told that it should be downloadable by the end of July so stay tuned for a technical review.

Disclaimer: I was invited by HP to Discover 2013 and they paid for travel and accommodation, I have not been compensated for my time and am not obliged to blog. Furthermore, the content is not reviewed, approved or published by any other person than myself.