Friday evening Ohio residents got hit by a pretty severe thunderstorm with 80+ mph winds. Needless to say everything was a mess, power was out, trees were down, anything not tied to the ground blew away. My wife called me about 4:30pm to let me know the power had went out, and when I got home about 6pm it was still out. What to do…

We were getting ready to go get some dinner at one of the places that still had power, and while walking through the garage I noticed that the status lights on my uncles old alternative power contraption were still flashing. I have written about this setup before but didn’t go into much detail as I really didn’t know much about it. Since that post I have tinkered with it on and off and have learned a lot about it, and while it still doesn’t automatically switch parts of the house over to it, I thought maybe there would be some juice in the batteries.

After flipping one of the toggle switches a few times to manually make the PLC switch the four zones from Grid power to Battery power I noticed that my refrigerator and freezer were back on! I have to admit that I did not expect too much because the only thing charging the massive fork lift batteries were 6 solar panels on top of the house, as the wind turbine needs a new charge controller board. So we left for dinner and were gone about 2 hours, traffic was crazy in town. When we returned I noticed that everything was still running, I was pretty excited to say the least.

The next morning I woke about 7:45 and went out and noticed things were still running fine, at this point I was just impressed. But because the batteries are only hooked to a 1500watt inverter I knew that we wouldn’t be able to sustain the whole house for any extended amount of time, especially if the sun wasn’t out to recharge the batteries. 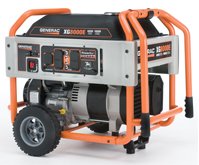 After making several calls and driving all the way to Columbus I finally found a place with a generator. We purchased a Generac XG8000E portable generator, which was a little pricey but I figured it would be better to go too big than too small. I was very impressed with this thing, in fact so impressed I actually wrote a short review of it on their site, which I normally never do. To say the least this beast got the whole house through the outage and managed to run everything we asked it to. It was even powerful enough to run the air conditioning for parts of the day. I didn’t leave it run with everything else on, but instead used it just long enough to get the house down to a reasonable temperature and then let the house maintain itself for several hours during the heat of the day and at night.

The only other thing I would mention is that having a GOOD UPS around that is about 500-1000va is also vital if you are planning to plug in your TV or other electronics. Pretty much any generator will provide power that is less than idea for these types of devices. I like the Liebert GXT series as use one on anything important. Because of the crazy stuff my uncle had built to harness the solar and wind power generators he actually had a True Sine wave 1500va inverter already installed too, so most of the power the devices in the house seen this weekend was about as good as you can get.

Once I get caught back up with stuff I will get some pictures of the alternative energy setup and try my best to map it out in a post as well.