I’ve been asked several times if this combination will work, I guess the HP site says they are not compatible… or at least doesn’t list them as being tested and working. We do have a customer that runs an SC08e card in a DL320 G5p and it works fine, but my best guess as to why HP does not list the G5 models as supported for the SC08e card is because of the PCI-Express bus in those servers.

Stuff you probably don’t care about

The big difference between PCI-Express 1.0 and 2.0 is the bandwidth that the interface receives, basically 2 is twice as fast as 1. So even though we have a 6Gbps SAS interface on the outside of the card, we will only have 4Gbps on a PCI-E 1.0 x8 interface… where as we have 8Gbps on a PCI-E 2.0 interface. Also the PCI-E 2.0 cards run at a 5Ghz frequency and the 1.0 cards only run at 2.5GHz, although the PCI-Express specifications say that most 2.0 cards WILL work in a 1.0 motherboard slot.

Anyhow… no one usually cares about that stuff so on to the stuff you really care about.

Will it work or not?

On Saturday i stopped by the office to test out if the cards would really work. I tried the cards in two different servers that are not on the Supported list from HP, the first was a DL385 G2 and the second was the DL380 G5. The reason I tested on a DL385 G2 is because they are the AMD equivalent of a G5 Intel box, and because we have 6 of them in our VMware lab.

Anyhow the DL385 G2 worked great, I transfered some VM’s from one LUN to another and I was able to achieve speeds that were the same as I could on DL380 G7 servers. This first screen shot shows that it is a DL385 G2 server, and my SAN LUNs are named SAN_LUN1 and SAN_LUN2

The second screen shot is of the performance graph while moving a VM from LUN1 to LUN2, and while doing so it achieved over 375MB/s which is the same as I seen a couple weeks ago when I paired a P2000 G3 SAS to a cluster of DL380 G7 boxes. 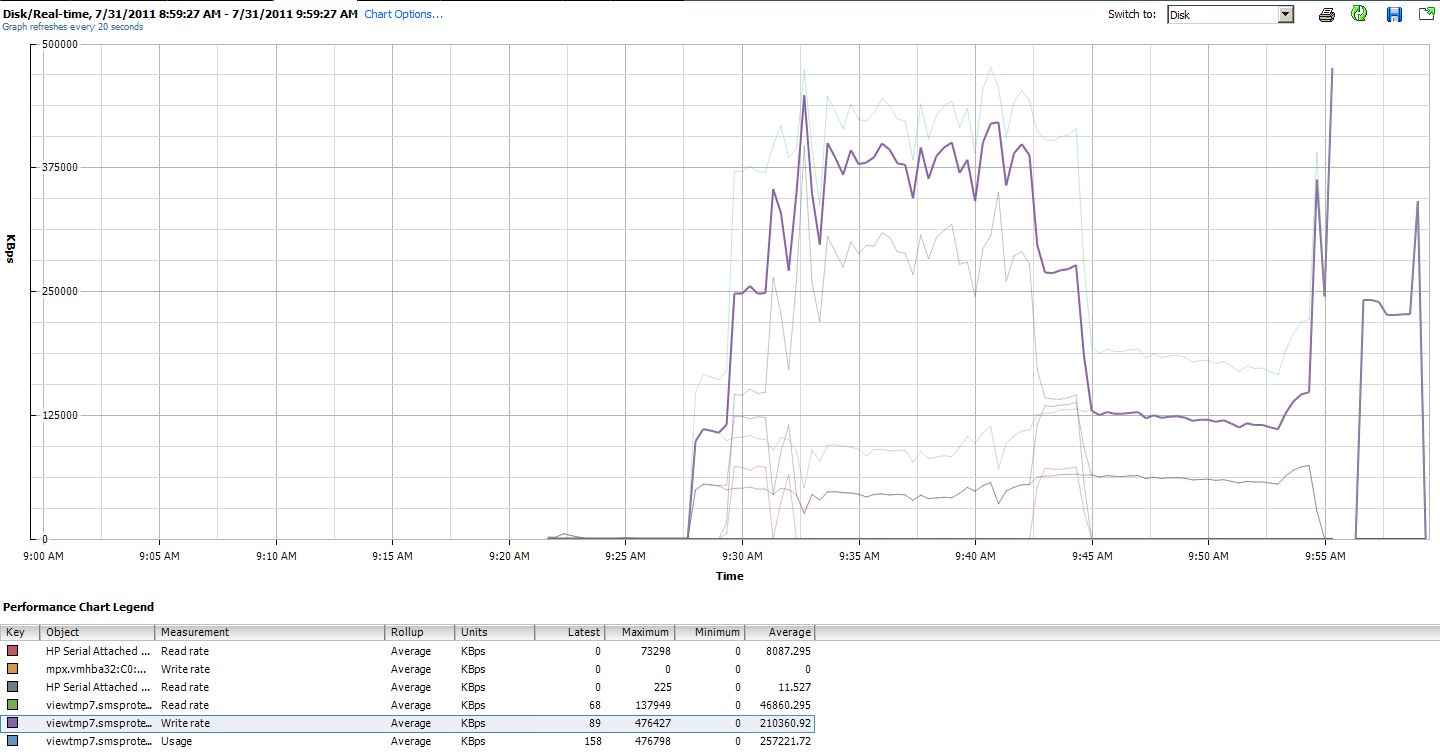 The second server I tested the SC08e card on was the DL380 G5, I did not hook the SAN to it as I only had enough time to shut it down, install the card, and then verify that it was found… but I see no reason why it would not achieve similar results. So my recommendation to all the people who have asked if the SC08e will work in a DL380 G5 is that it will work. I cannot however guarantee that HP will support it if you call them… as they are just going to go by what is on their spec pages.