Recently while working with a customer we had to get a little creative with an installation and I thought I would share the experience.

Here is a little background info…

Given this situation we had a few options:

There are advantages and disadvantages to each setup. And we actually tried both. The only real advantage to having a single veeam server is that all jobs were in one pane of glass and all restores could be started from one area. The disadvantages were much more obvious.

What we found is that because the file level restore happen on the “master” Veeam server it took incredibly long to mount backup images from the east coast Data Domain to our midwest Veeam Server. We were getting about 50Mbps on the wire while the mount operation happened… but from the local data domain we were getting almost 300Mbps.

Now for full VM restores I don’t think it would be quite as bad because we can specify a proxy at the remote site to do the full vmdk restore in hotadd mode… that will keep all the data local and it.

Because we had Data Domain replication in place I decided to see if there would be a way to mount the replicated copy in read only mode to the local Veeam “master” server. The idea is pretty simple… Use a Veeam “master” server at each site for local backup and restore as well as ALWAYS have restore’s pulling data from their local site’s data domain regardless of where the VM was originally backed up.

So here is how it works:

So that takes care of backing up locally, and getting offsite replication… but the cool part is how we can do restores of data from the opposite datacenter…

The midwest Veeam “master” has the mirror of this:

There is only one caveat to this setup. Because Veeam is not actively writing backup data to the CIFS read only share, it does not automatically import new backups that have been replicated. So you do have to preform a manual “Re-Scan” of the CIFS repo so that it pulls in the latest restore points. (However this can be automated with this powershell script http://helpcenter.veeam.com/backup/80/powershell/sync-vbrbackuprepository.html). 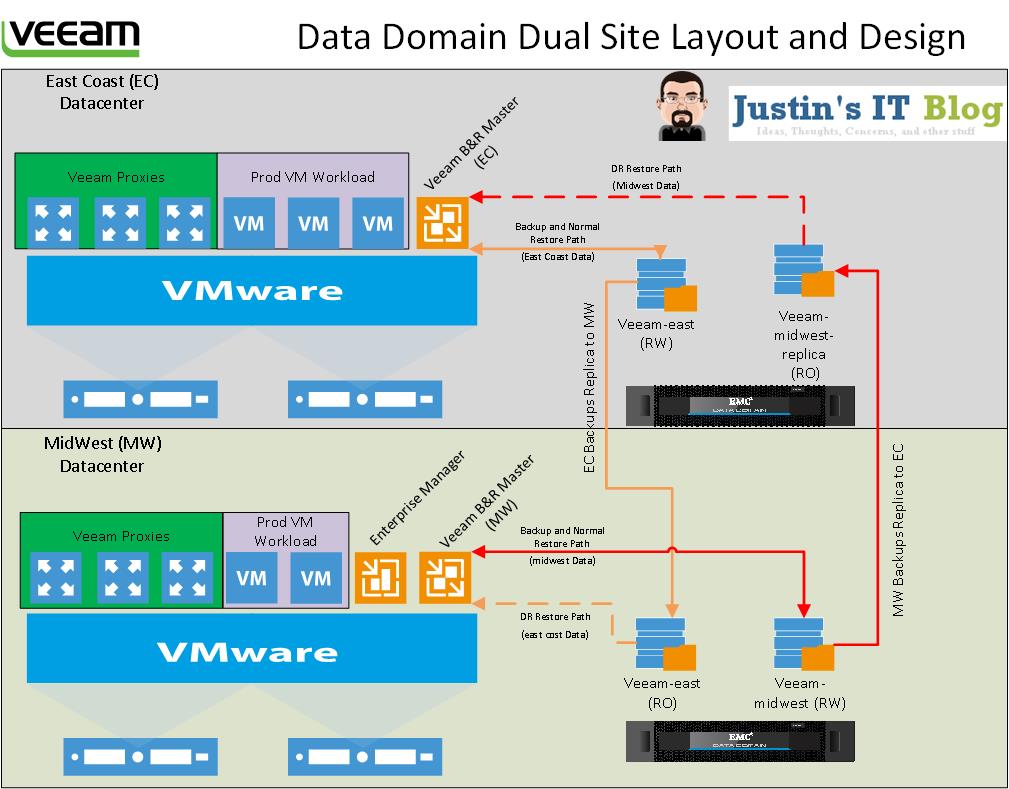 Basically what I have tried to do here is show the backup data path. You will notice a line with arrows at each end between the local Veeam master server and its DDBoost repository, meaning primary backup and restore data flows between them, then a directional arrow between the primary MTree and the replicated MTree showing the direction of DD replication. Lastly is a dashed directional line showing that “if” a restore of data needs to be done at the opposite site, the local Veeam server has a read only copy from the replicated DD MTree.

I should mention that the only reason that you would want to use the Read only copy to do a restore is if your primary site if offline and you need your data back. I didn’t envision this to be a replacement for datacenter migrations… however with some more testing it may actually be a decent option.

After seeing this particular customers requirements I do see some weakness in Veeam for a multisite deployment. But I’m not sure how many other backup products would really handle it any better. My suggestions would be to somehow use Veeam Enterprise Manager as a “vCenter Linked Mode” type controller. Combine that with DDBoost multisite replication (meaning that because of DDBoost Veeam could control the replication from one site to another at the DD level) and you could then create a multisite backup catalog…. then ideally all Veeam servers would know where all copies of the data are and be able to restore from them without any special hack like the one above.