With the release of vSphere 5 comes what many are calling the “vRAM TAX”. If you haven’t heard of it check out this post I made the other day. Anyhow, there are also some other changes to the SMB packages that VMware offers as well, so since @johntatum on twitter asked what it meant for the SMB market I thought I’d throw something together.

On the surface the most noticeable change is the price tag for Essentials Plus, it was $3495 + $874 for SnS… now its $4495 + $1124 for SnS, which works out to a 29% increase. So what do you get that is new for this 29% price increase? Nothing really… nothing besides the latest version of vSphere. Yeah OK, there are major enhancements to VMware Data Recovery, and VMware HA… both of which are in Essentials Plus, but really there are no major new features with the SMB packages.

Now back to the vRAM Tax … in vSphere 4 you were allowed to use up to 6 CPU’s in your Essentials/Essentials Plus cluster as long as they did not have more than 6 cores per socket, so essentially as long as 36 cores was enough to support your workload then you could add as much RAM as you needed. Making Essentials Plus was just as good as buying VMware Standard Licenses. Now in vSphere 5 we are still limited to 6 Cores / socket, but where VMware is really locking down the capacity of the Essentials kits is RAM…. we are now limited to 144GB of RAM for our SMB cluster. It doesn’t matter if I have one host with 144GB of RAM or 3 hosts with 48GB of RAM each…. 144GB is the limit. This makes VMware Standard licenses nicer if you needs lots of RAM, why? Well if 144GB isn’t enough RAM you can just buy a couple more Standard licenses… each giving you access to allocate another 24GB of RAM to virtual machines….you can’t do this with either of the SMB kits. The bottom line for the SMB kits is now RAM… if you need to allocate more then 144GB of RAM to VM’s… it’s time to step up to at least Standard licenses.

So here is what you have seen before: 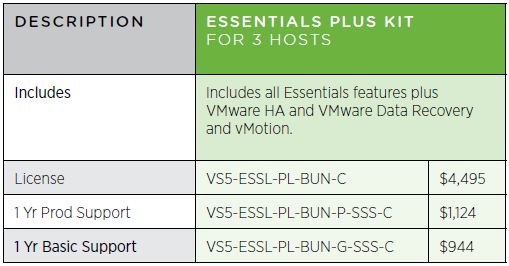 So if you look at this first graphic we see the Essential SMB kit… it says it offers up to 3 hosts with 2 sockets each, 4-way vSMP, Thin Provisioning, and Update Manager…. this is the same as the old days in vSphere 4. Next we move on to the Essentials Plus SMB kit… it adds the same features as before… HA, vMotion, and Data Recovery. The price is the new part. So your probably asking is ANYTHING major new in the SMB area? Yes… but it is going to cost you extra 🙂

This next graphic shows Essentials Plus with the new VSA software. VSA stands for Virtual SAN Appliance, and is a new offering for SMB’s that replaces a hardware SAN with software that runs on your ESXi hosts, and then presents local storage in the servers back to your cluster as shared storage… just like a real SAN would do. 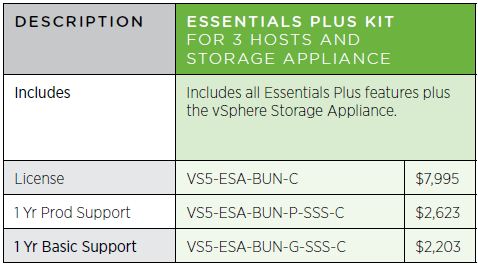 It looks like bundled with Essentials Plus it will raise the price $3500, but on the other side of the coin it will save you money since you don’t have to buy a SAN. Don’t get too excited though, as you will still need to buy drives… and more of them.

Let us start at the “beginning”, this is not a new concept… Lefthand networks, and now HP Storageworks has been doing this for years. The first VMware cluster I ever designed actually used the P4000 VSA and vSphere 4.0, and it works great. After I moved from Network Design at SMSproTech to Service, I got a chance to work on this cluster and its uptime was over 365 days …. actually it had been running since the time the engineer installed the project… 100% uptime. I won’t go too deep into the HP SAN, but from a first glance the HP VSA will get you more features then the VMware version, check here for a great blog post on the subject.

Overall vSphere 5 is going to be great! the downside is that VMware wants a little more money from you to use it. My best advice is to go ahead and buy vSphere 4 if you were planning on it, get your project started and get comfortable… you will have SnS and can always upgrade down the road. Plus right now there is a lot of confusing and FUD online, so work with your reseller when the time comes to purchase ( if your project is down the road) and they will help make sure your taken care of.