Since I started blogging (almost 1 year ago) my labs have changed quite a bit, so I thought I would go through what is in the lab these days.

First off, I maintain two virtualization labs, one is right beside my desk at work, and the other is about 30 miles away at a colocation facility. The second lab also hosts my blog, as well as some other sites that people have asked me to host. They get the free hosting, and I get to manage VM’s that actually generate some load.

This picture was taken when I was regularly blowing circuits 🙂 I will get an updated picture sometime, but let me explain what is in the picture. From the top down is: EMC Clariion AX4-5 with SPS, HP DL365 G1, HP MSA2000 G3 FC/iSCSI Combo. Then there is a Liebert GXT2 UPS, and my workhorse… an ML370 G5 with 22GB of ram, then an MSA30 U320 Shelf, then an EMC Clariion NS-120, and finally an SMSproSafe appliance. Most of this hardware has since left the lab rack and been replaced by other hardware. Since this photo my permanent Lab SAN has become an MSA1000 Fiber Channel box with Dual Controllers in Active/Active mode.

Update: I’m off to pickup 6 DL385 G2 servers for the virtualization lab today. So we will have some XenServer’s and some new VMware boxes to play around with. These have the dual core Opteron 2218’s in them so they support 64 bit guests 🙂

This lab hardly ever changes and this is the latest picture from it. Top down: Cisco 3560 24 port Layer 3 switch, then a Cisco PIX520…. yeah she is old, but I have a spare and it passes traffic pretty fast… haven’t had a problem with her yet (knock on wood 🙂 ).  Next are the two workhorses, a pair of HP DL365 G1 servers, each have 2 – Dual Core AMD Opteron 2218 procs, and one has 10GB of ram and the other has 8. Ram should be getting an upgrade to 16GB per box soon. then there is a Compaq DL320… this is a standalone linux server that has two IDE drives in RAID1… the only thing this box does is provide storage for the Veeam virtual machine to put its backups. Lastly is the MSA1000 SAN with MSA30 expansion shelf. Total there are 3 RAID groups, two groups are RAID5 with 36 GB drives, and in the second shelf are 8 x 146GB drives in RAID10 with a hot spare… that RAID group is pretty fast 🙂

Future plans for  this Lab include a DL380 server with more storage space and Windows so that I can make the Veeam Backup server a physical machine. Combined with a Fiber channel switch I will then be able to move from Virtual Appliance mode to Direct Attached Mode, plus if the SAN fails I can utilize vPower’s Instant Recovery feature to bring my VM’s back online. 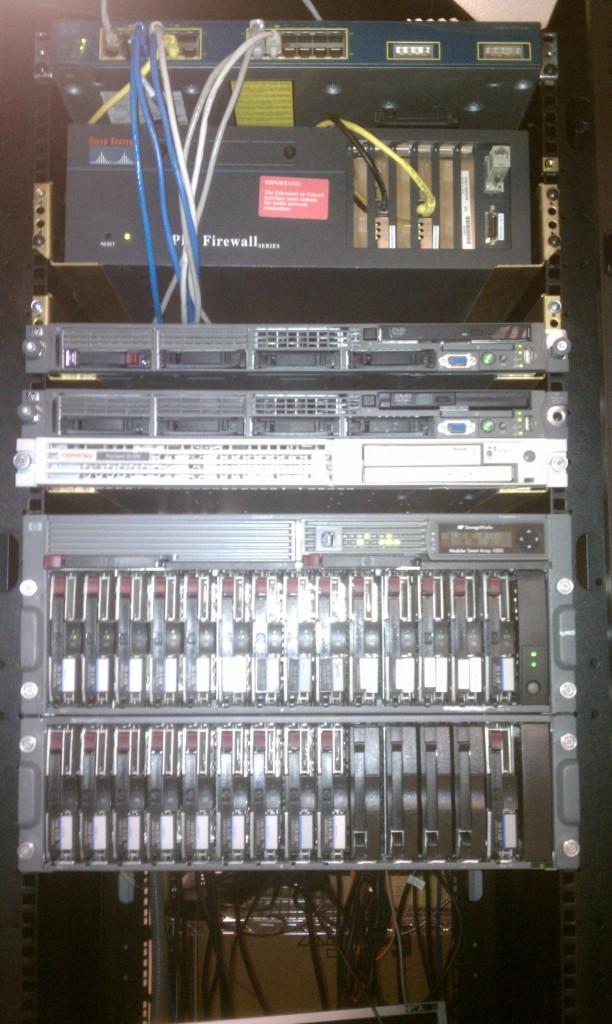