I found a new error in vSphere 5 today that I haven’t seen in previous versions of vSphere purely by accident. I set up a Veeam Backup and Replication VM to temporarily backup some VM’s and after several failed backup attempts this error appeared on the “Summary” tab of a VM. 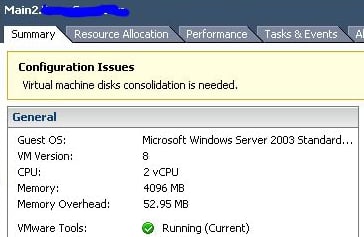 This is pretty handy because in previous versions it was a real surprise when your VM just powered off and the only explanation was in the Event log where it would say something to the effect of “to many redo logs, stopping vm”.

The Veeam job that caused this issue was run 2-3 times while troubleshooting and even though Veeam told VMware to remove snapshots (and VMware was showing tasks where it said it had completed the remove), I ended up with a datastore looking something like this:

To correct the issue I just needed to take a snapshot manually and then click “Delete All” inside of the snapshot manager, but in order to get things to actually back up with Veeam, I had to bypass the vCenter 5.0 host and connect directly to the ESXi 5.0 host. After doing that the VM was able to back up.

For the time being, I would recommend waiting to upgrade to vSphere 5 if you use Veeam. After some reading, it looks like they are still tweaking the VMFS5 support as well as some of the other major features. There are several forum posts to support this as well, some include:

(from @gostev at Veeam)

Our QC has found the following incompatibilities:
• Incremental replication passes to ESXi 5 target fail (initial pass works normally).
• Backup in direct SAN access mode will fail for VM disks on VMFS5 volumes.
• SureBackup is not functional when ESXi 5 is used to host the virtual lab.
• Multi-OS FLR is not functional when ESXi 5 is used to run the FLR helper virtual appliance.
• vCenter Server 5.0 causes job to fails with the “Inactive datastore” error. Jobs on standalone ESXi 5 hosts do not seem to be affected by the issue, but all jobs configured through the vCenter Server 5.0 connection are.

So, for now, I would wait… but it sounds like a hotfix is coming soon.