Backup for more than just VMware!

There has been a lot of transition in my geek lab in the last six months. I have been exploring public cloud, I no longer have a home lab, plus my colo was completely torn down and rebuild with different gear.

A product that I have been playing around with during this whole process has been Nakivo. Between Nakivo and Zerto I have not lost any sleep while moving my blog to Azure, or while replacing my entire storage infrastructure at the colo. Why?

In my other articles about moving my blog to Azure, I demonstrated how I minimized downtime with Zerto to move that workload to Azure. What I didn’t talk much about is what I was doing with all the other VMs that didn’t need minimal downtime during that transition. Enter Nakivo.

Flexibility During the Colo Move

Did you know you can install Nakivo on almost anything? I LOVE this feature! There are installation packages for Windows devices as well as Linux and even some for NAS boxes!

During the colo migration, I leveraged a Zotac ZBox as my all in one backup appliance. Essentially it is a super tiny pc with a small quad-core Celeron and space for one SATA disk. I chose to go with a 1 TB SSD disk, as I figured the last thing I needed was an IO bottleneck. I then installed Ubuntu Linux 16.04 on it and loaded it with the Nakivo Linux Installer. Then I put the backup appliance on the network with my old infrastructure at the colo, I created a VMware backup job for the VMs that I needed to keep, and wah-la… Backup Complete!

Once everything was backed up to the Zotac box I had a copy ready to be restored once my new infrastructure was in place at the colo.

The config for my Zotac Zbox is:

I know what your thinking, that had to be so slow, but you’re wrong. Let me explain why.

Architecture build for everyone

Backup Repositories – As the name suggests these are where your data gets deduped and compressed for long-term storage.

Transporters – These are your worker bees. You can have stand-alone transporters or an “onboard” transporter that lives on the management server. These are both scale-out and scale-up, so you can increase CPU/RAM capacity in them, or you can deploy a whole bunch – the choice is yours.

So how did this help me?

Well if you remember I said the Zotac box was a quad-core Celeron … pretty unimpressive right? Well, by leveraging a transporter that sits on my beefy VMware ESXi server I am able to offload all of the hard work to the CPU/RAM there, then the only work that the Zotac box has to do is handle receiving network traffic and storing it on the SSD!

If this sounds familiar, you are right, Veeam leverages an architecture much like this. So if you have Veeam, but hate the price… Nakivo is something you should certainly look into.

Nakivo has a good page that explains how transports can be leveraged, basically, if you understand Veeam backup proxies – you already understand Nakivo Transporters.

Nakivo chooses to use a web-based interface for their software, this is a key feature to allow for flexibility. It also means that I can configure backups from my MacBook just as easily as I can from my Windows 10 desktop. 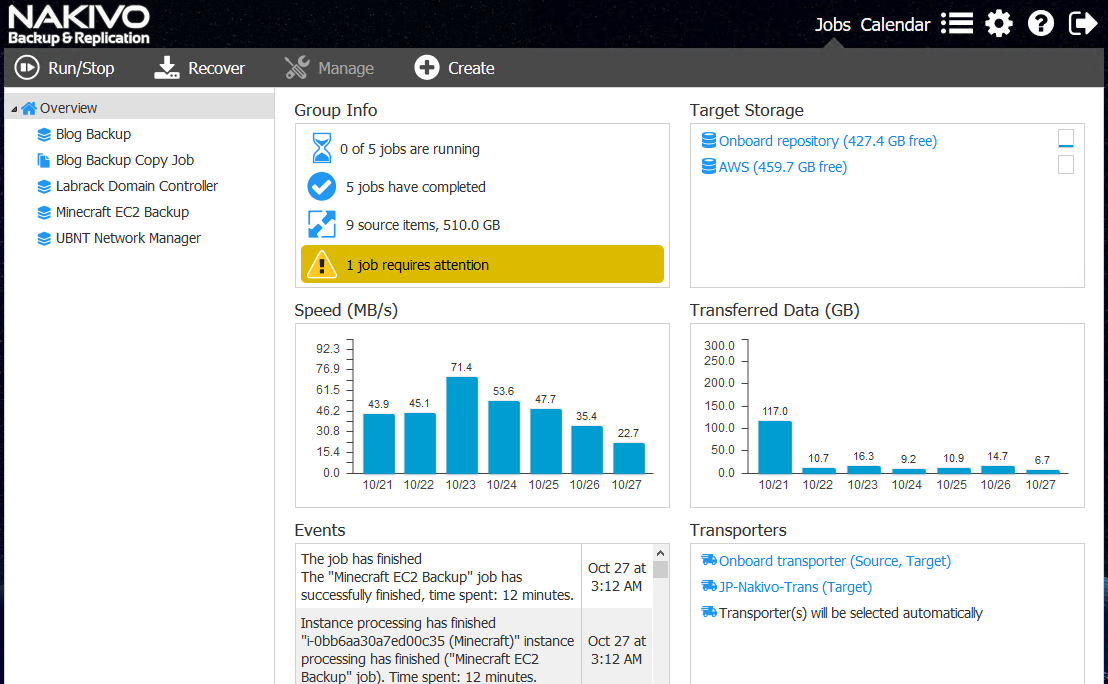 Here is a peek into the recovery operations… I plan to do some future articles detailing some of these, but for now, I’ll just highlight that Active Directory Object restores and other MS based objects are included.

If you are leveraging AWS take note of that last option on there too. 😉 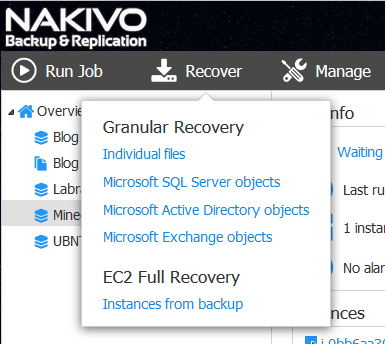 Speaking of EC2 Full Recovery… Remember I said I had been messing with the cloud more? Well if you look back at the first interface screenshot you notice a “Minecraft EC2 Backup” job. I run a Minecraft server for my daughter, and currently, it lives in AWS… so it’s pretty awesome that I can backup all her hard work with this software.

The only criticisms I have of the AWS related features is that I would love to do file level restores, and I would love to be able to replicate and recover to VMware and HyperV. I’m sure those features are already on the roadmap though.

In the mean time, here is what you can select for EC2 Full Recovery today… 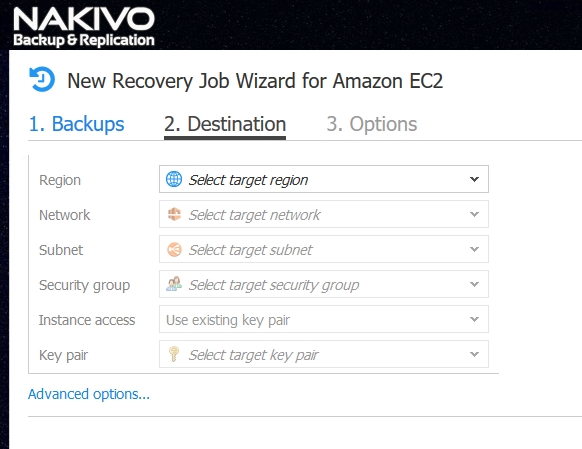 So if a region fails you can recover your VM’s to any region, attach it to any network and subnet, plus reprovision with a key pair in that region! Pretty cool stuff!

I hope to explore Nakivo Backup and Replication more deeply in the coming weeks and months. It is certainly a nice backup package at a great price, so if you have been looking around for something to replace a more expensive solution or if you are just getting into the virtualization space and need a VM only solution… Nakivo is a great choice. Here is a link to the free version to get started too!

I’m hoping that I can get a post together very soon on how you could do a super cost effective HyperV + Nakivo SMB solution for local and offsite backup. Stay Tuned!