Wednesday, 8 February 2023
You are here: Home 2016 August How To Use Zerto’s Swap Disk Feature with Linux

If minimizing WAN bandwidth is important to you then you will certainly want to know how to use Zerto’s Swap Disk feature. There are a few modifications that you will need to make to your virtual machine in order to utilize the feature, but in some cases they are well worth the small amount of effort that it takes to implement them.

What does It Do?

Both Windows and Linux systems (be them physical or virtual) use a virtual memory area called swap. Swap is a place on a storage device that the operating system places pages of memory if “real” memory (RAM) isn’t available. Normally this happens when the system has an under allocated amount of RAM for the workload it has been assigned.

Swap space is treated just like RAM to an operating system, meaning that it is needed while the power is on … but once the power goes out anything still in swap is no longer needed. So if we were to fail-over a virtual machine, the data in the swap disk is no longer needed… therefore there is really no reason to replicate it… or waste WAN bandwidth in the process.

Hence Zerto’s Swap Disk feature, the rest of this article will explain how to utilize the feature with Linux virtual machines.

Looking for the How to for Windows?

More details on the different levels of swap space in my other post here.

I am most familiar with Debian based linux distro’s. In this example I will be using an Ubuntu 16.04 VM.

First, to see if your system is configured for a swap location you can run ‘top’. In the upper section you will see stats on free RAM as well as SWAP space.

The next step is to check to see where the swap space is writing data to on disk we can check this by viewing the /etc/fstab file. We are looking for a line in the file that has the word “swap” located in it. In this example, where all of the default settings were accepted during installation, the swap space is a partition on the same VMDK file as the data. In order to use the Zerto Swap Disk feature we need to separate out this partition to its own VMDK file so that we can mark that VMDK as a swap disk.

Here is what the Virtual Machines Configuration looks like before we add a virtual disk dedicated to swap space.

The next step in implementing this feature is to add a new virtual hard drive to the VM. We only need to add a disk that is about the same size as the amount of RAM in the VM. In my example that is about 4GB, but I went ahead and created a disk at 5GB. (Note there was no special reason for this, I just felt like creating 5GB instead of 4GB).

Modifying Linux to use the new VMDK

The next step is to switch linux over from the swap partition to the new dedicated SWAP disk. This can be done without a reboot or downtime as long as you minimize RAM usage before you remove your old swap partition. Failure to reduce memory usage to below your physical RAM size will result in ‘out of memory’ or ‘could not allocate memory’ errors.

Before we can put the new disk to use we have to do a few things:

If you don’t already have the tools to rescan the SCSI bus you can either install them, or simply reboot the VM is that isn’t a big deal for you. To install the tools on Ubuntu you can run “apt-get install scsitools” as root (or sudo).

Once installed you can run “rescan-scsi-bus” which will look for the new disk that we added in the previous section. For my VM the new disk was detected as /dev/sdb.

Next we need to partition the disk. To do that I ran “cfdisk /dev/sdb” and created a gpt partition table and one partition. I then set the partition type to “Linux Swap” and wrote the changes to disk.

Now is as good of a time as any to go ahead and modify our VPG and mark the new disk as a swap disk. Why? Well because at the moment the vmdk is formatted and ready to be used… but contains no data and if we mark it as swap now no WAN bandwidth will ever be used by this disk. If you were watching Zerto’s web GUI while you added the new virtual disk you will have noticed that Zerto already created the virtual disk at the recovery site and is doing its initial volume sync… which will take all of about 30 seconds since there is no data on the disk.

Here are some screenshots of the process in case you didn’t have the GUI open yet.

What the VPG looks like before adding the dedicated swap VMDK

After adding the new dedicated VMDK for swap

As you can see the only real difference between this screenshot and the one above is that we have checked the “Swap” box aside the swap VMDK. Once you do this go ahead and click Done to save the changes. That is all that is needed on the Zerto side.

History Not Meeting SLA after adding the new VMDK

You will notice some extra throughput as the new VMDK is scanned for data, but because it is mostly blank (aside from formatting) you will see minimal WAN usage during this sync. And as long as we mark it as swap before putting it into service as the swap disk, very little WAN bandwidth will ever be used by this disk.

In order to use the new swap space we need to deactivate the old swap partition, to do this we will turn swap space off… this is where it is critical that your memory usage is less than the amount of physical ram you have. If you cannot make that happen then your best bet is to skip turning off swap at this time…. proceed with modifying the fstab file… and then rebooting the VM when it is able to be rebooted.

To turn off swap run the command “swapoff -a”. Depending on how much swap space was in use this can take a little time while linux moves everything that was in swap, back into RAM. Once it is all moved out “top” will show 0 KB used. Then we can modify fstab and lastly turn swap back on.

The purpose of modifying the /etc/fstab file is to add an entry for the new swap disk as well as remove the old partition’s entry. To make things easier you can cut and paste the old line and then modify it with the new disk’s details.

Save the fstab file with CTRL + X and then confirm that you want to save the file.

We can now reactive swap with “swapon -a”. To verify that swap is back in action you can run “top” again and see if a total swap value is listed. 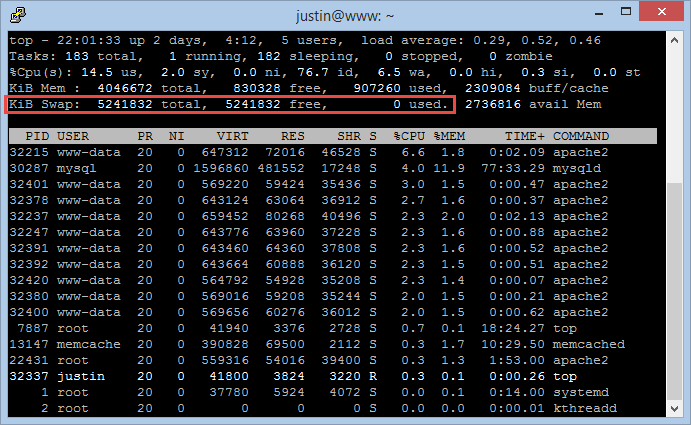 At this point Linux us using the new swap disk for any memory paging that goes above the amount of physical RAM. It will generate storage I/O locally at the production site, however now Zerto will ignore those write I/O’s and save you bandwidth!

Disclaimer: I work for Zerto, however any views or opinions expressed here are strictly my own. I am solely responsible for all content published here. This is a personal blog, not my employers blog. Content published here is not read, reviewed, or approved in advance by my employer and does not necessarily represent or reflect the views or opinions of my employer or any of its divisions, subsidiaries, or business partners.