If you tried to access my site Saturday you probably got a “page could not be displayed” message. Apparently the power at the datacenter in Dayton went out for a bit and took out one of the service providers switches. So between that and some upgrades I’ve needed to do for a while, we are back online. Now my ESXi servers are utilizing an MSA1000 Fiber Channel SAN. Hopefully this will also speed up the site a bit since its on 7 spindles instead of 2. Other upgrades include 3GB more ram to ESXi2, bringing both servers to 6GB. I also have two 2.4Ghz processors to put into ESXi2, but forgot them so that will have to be another day. Before the upgrades the servers were at about 70% memory usage and averaged about 30% CPU usage each. But because the storage is all on the MSA now, I was able to delete to Openfiler virtual machines that were sharing the local esx storage to the other servers. The initial design got the job done, but this is much cleaner and faster. 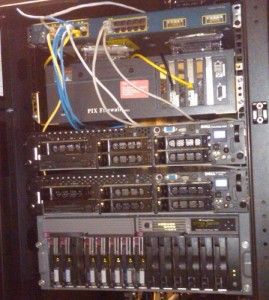