Over the last couple of weeks I have noticed some things that I think are missing in several of my favorite products. Lets start with VMware vSphere. The feature I’m going to talk about first isnt really “needed” as there are many ways to get around it… but I still think it would be really handy.

1.) Ability to mount a “blank” CD or DVD inside of a VM. Essentially change the VMware CD/DVD Rom drive to a VMware CD/DVD Re-Writable. This would enable me to copy files from a VM on to a blank CD and then save that CD in to ISO format so that i could then burn it to a CD later on.

The next vendor is Veeam, I’ve been working with Backup and Recovery a lot lately and think its an amazing product and is by far my favor VMware backup solution. With that said I can think of two things that are missing.

1.) Backup Image encryption. Yes I know it will make backup take longer and require more CPU cycles, but we have many customers that like to do off-site backups to our office. Its easy to encrypt the data while its in transit with a VPN tunnel, but after it lands on the disk at our office it is completely unencrypted…. this makes some customers nervous.

2.) Replication Bandwidth Throttling. Not that I really care if I flood the pipe at my colo or my employer, but I’m sure that some IT teams would really like to be able to throttle their replications back to only a portion of their WAN circuit.

Comments are welcomed, and encouraged. I know there are alternative ways to do all of the things about, but I think if these features were built in the products would be that much more complete.

I have updated this post because of a feature in vSphere 4.1 that needs some tweaking. Under the network section of the “Configuration” tab there are buttons that will allow you to see the Cisco CDP information and figure out where your server’s NIC’s are plugged in… one problem: The annotation box that pops up does don’t scale larger if your CDP information is longer. There is a screen shot below of the issue, so if your a VMware developer… or someone important enough to make a feature request please submit this one for me 🙂 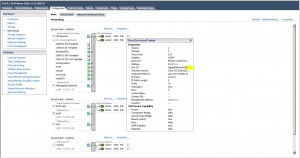